All Collections
Donut FAQs
Donut Pairings
What happens if someone is repeatedly unresponsive to pairings?

What happens if someone is repeatedly unresponsive to pairings?

Written by Courtney Stratton
Updated over a week ago

If someone is unresponsive to Donut intros three times in a row, we'll automatically mark them as a ghost 👻and stop including them in future pairings for that channel. This prevents teammates from mistakenly being paired with someone who does not wish to participate and creates a better experience for your team.

When is someone considered unresponsive?

Someone is considered if they have not taken one of the following actions in their last three pairings:

Does Donut notify users that they have been excluded from Pairing?

Yes. Users will be notified twice about their auto-removal from a pairing channel:

1. The first notification is sent immediately after they are marked as a ghost. The message will include a button to remain active in the channel.

2. The second notification is sent immediately after the user is first excluded from a pairing round. The message includes a button to remain active in Donut intros.

How does someone resume pairings once they've been excluded?

Users can re-activate their Donut intros and stop being excluded by: 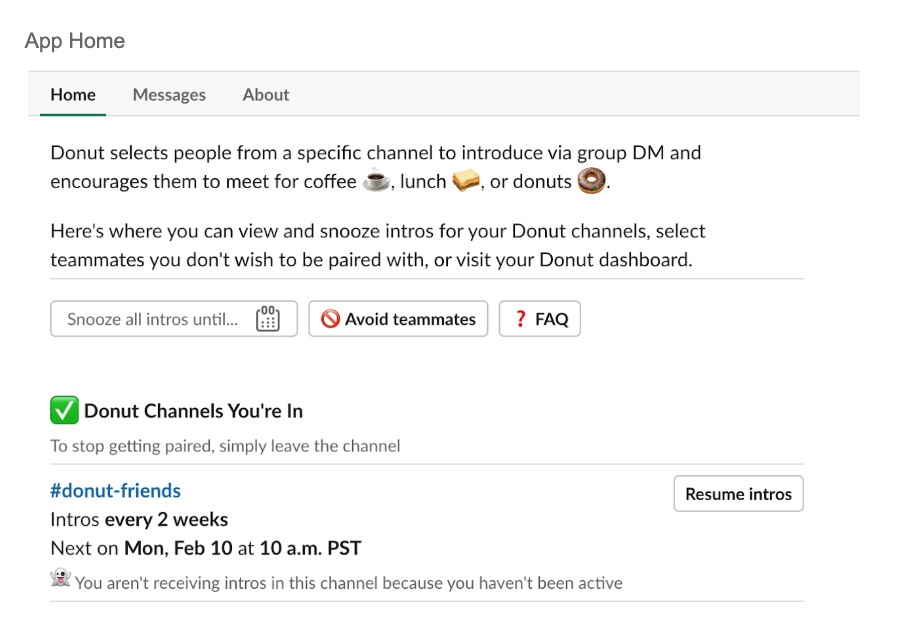