All Collections
Donut Intros: Getting Started
FAQs for Admins
What happens if someone is repeatedly unresponsive to intros?

What happens if someone is repeatedly unresponsive to intros?

Written by Courtney Stratton (she/her)
Updated over a week ago

If someone is unresponsive to Donut intros three times in a row, we'll automatically mark them as a ghost 👻 and stop including them in future intros for that channel. This prevents teammates from mistakenly being introduced with someone who does not wish to participate and creates a better experience for your team.

When is someone considered unresponsive?

Someone is considered unresponsive if they have not taken one of the following actions in their last three intros:

Does Donut notify people that they have been excluded from Intros?

Yes. Anyone Donut marks as a ghost will be notified about their auto-removal from an Intro channel:

The notification is sent immediately after they are marked as a ghost. The message will include a button to remain active in the channel, ask again later, or to exclude and stop asking.

If you choose “Exclude me and stop asking” you’ll be brought to a page that will ask for feedback on why you want to be excluded. Once you click submit you’ll be excluded from future Donut Intros. 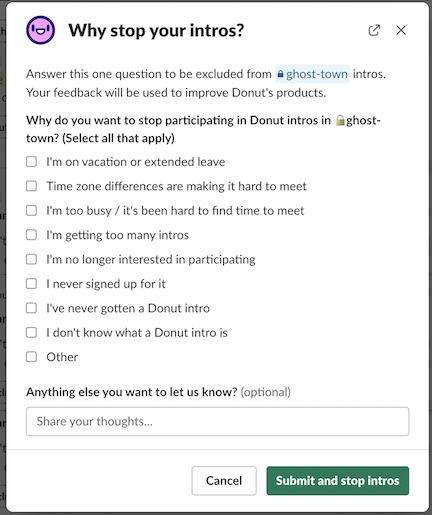 Can I see who on my team has been excluded?

Yes! If your team is using one of Donut's paid plans, you'll be able to view who was excluded and why. To access reporting on your team's Intro Groups:

If someone's status is "ghostbusted," this indicates they were excluded because they were unresponsive for the past three intro rounds.

How does someone resume intros once they've been excluded?

Your teammates can re-activate their Donut intros and stop being excluded by: 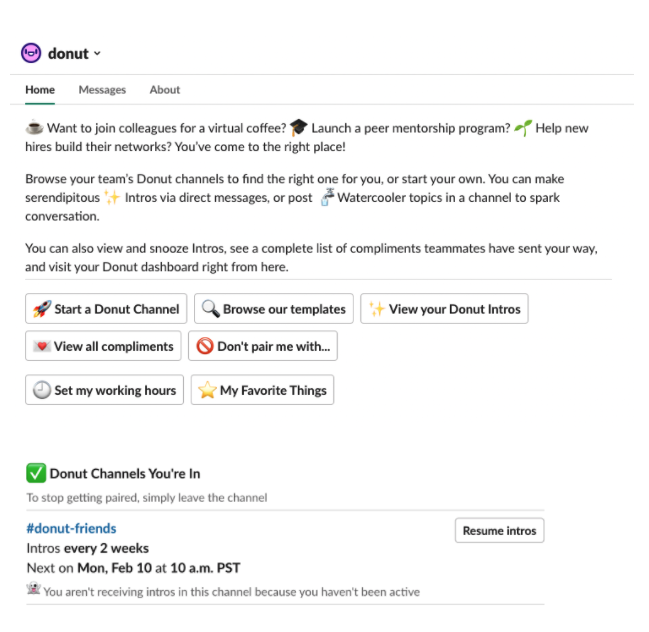